Then & Now - 95 years, Roaming the Halls of Kennett 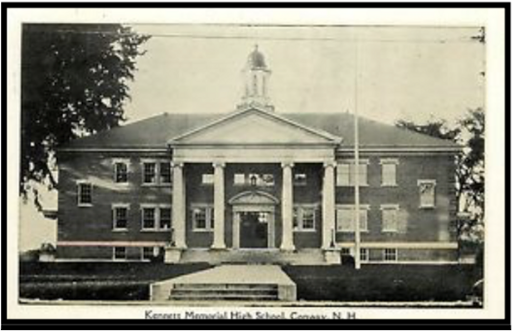 Then & Now - 95 years,  Roaming the Halls of Kennett On September 15, 1923, a dedication took place with 800 residents from Conway and surrounding towns. This ceremony was to present the keys to Kennett High School to William Carter, town treasurer. Mr. Carter in return presented the keys to Arthur Furber rep- resenting the school board and asked for the co-operation of the townspeople in managing this wonderful gift from A. Crosby Kennett. Just 2 days later, thirty-six students enrolled as Seniors at A. Crosby Kennett High School. This school was to bring an enlarged corps of instructors, permitting advance work and a wider range of courses in language and literature, special courses in domestic science and splendid opportunities for practical and manual training. As well as athletics and all extra curriculum activities were greatly improved. Fifteen years later (1938-1939) Kennett began busting at the seems, enrollment was up, due to the baby boom after the war and an addition wa
Post a Comment
Read more 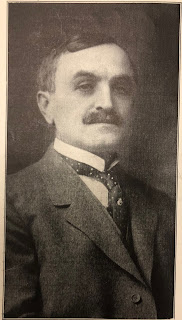 A. Crosby Kennett for whom our beloved school was named after Few teachers or students are aware of the importance of this individual for whom our institution of higher learning was named. Are you? A. Crosby Kennett was born in Madison on July 27, 1859, just prior to the outbreak of the Civil War. He was the son of William Kennett of Madison and Sarah E. Russell of Conway. He attended schools in Madison and New Hampton. A great local trivia question would be, "What was A. Crosby Kennett's first name?" Old-timers such as Maurice Lovejoy, who Kennett took under his wing as a kid, said he hated the name and therefore went by the middle name. The answer: Alpheus. Mr. Lovejoy also relayed that whenever Stone's Drug Store came out with a new flavor of ice cream, A. Crosby would take him there to try it out. "That probably did not help his health at all as he loved ice cream," Maurice related. The Kennett’s were of Scottish origin and came to America in 1741 an
Post a Comment
Location: Conway, NH 03818, USA
Read more

Between 1923 and 2020 a period of 96 years of Kennett High School’s existence, there have been thirteen different principals, eleven men, and two women.   Mr. Ernest Weeks was Kennett’s first headmaster and a graduate of Bowdoin College.  He served Kennett as its leader for 3-4 months in the fall of 1923 and then was forced to resign his leadership post because of illness.  He was well-liked by students and staff and did an excellent job of getting the school started.   He was succeeded by Mr. Ellis W. “Mac” McKeen, who took over in late 1923 and served Kennett High School with distinction. To Mr. Ellis W. McKeen goes the honor of serving Kennett for the longest period of time, a span of twenty-four years. Mr. McKeen originally was hired as a teacher of math and science, but when Mr. Weeks became ill “Mac” took over the responsibilities of the School’s Headmaster and served Kennett High School from 1924-1947.  Born and raised in Fryeburg Maine, he graduated from Fryeburg Academy a
Post a Comment
Location: Conway, NH 03818, USA
Read more